Gearbox Casings Are Produced Up To Two-Thirds Faster

Replacement of an ageing, single-table, horizontal-spindle machining centre (HMC) with a new, German-built Burkhardt + Weber (BW) twin-pallet model supplied by UK the agent, Kingsbury, has revolutionised the machining of industrial gearbox casings at Renold Gears, Rochdale. They are produced mainly from iron castings and fabrications but also from steel and aluminium.

The resulting savings in floor-to-floor times of between one-half and two-thirds are due to increased metal removal rates during cutter engagement, significantly reduced non-cutting times through faster axis movements, fewer operations due to better fixturing methods and faster component changeover through off-line set-up on the second pallet.

Furthermore, with the twin-pallet configuration, if there is an issue during machining of a component it can be brought out of the working area for inspection, allowing production of the next part to commence. Such troubleshooting would have resulted in a lot of unproductive time on the previous machine. 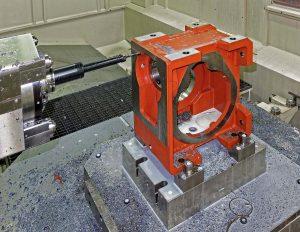 Renold’s gearboxes are large prismatic components that can measure more than two metres in height and weigh up to three tonnes. Around 20 per cent of products are standard, the remainder being customer-specific designs that are manufactured in quantities of between one-off and 30-off per month. Fast, flexible machine tools are needed to produce such relatively low batch sizes cost-effectively and allow the manufacturer to compete in world markets.

When the company’s CEO was appointed in 2013, he instigated modernisation initiatives that started with the factory infrastructure. A programme followed of drive and control retrofits and mechanical upgrades to what are fairly specialised machine tools, such as worm screw and wheel production centres.

Three years later, the production staff was asked which machine on the shop floor they would most like to replace and the large HMC was almost unanimously chosen. Its unreliability by then was resulting in sometimes having to subcontract out machining to meet production deadlines. After several twin-pallet HMC options had been considered, a BW MCX1400 with a 3,200 x 2,200 x 2,000 mm working volume and B-axis NC table was purchased.

A senior manufacturing engineer at Renold Gears commented, “During trials, the BW machine proved capable of more than halving the cycle times on the old HMC and was also more productive than the other 4-axis machines with pallet changer we considered.

“We gave two test parts to each potential supplier, a gearbox casing for a heat exchanger and for an escalator drive. On average, they were machined around 15 per cent quicker on the MCX1400.”

Key elements of the machine specification that deliver such high productivity are acceleration at up to 5 m/s² to rapid traverse speeds of 60 m/min and a 60kW / 3,500 Nm / 5,000 rpm spindle with HSK‐A100 interface.

The engineer added that other factors favouring the chosen HMC were its availability on short delivery; and its ergonomic design, which promotes safety when personnel approach the machine to access the working area or to carry out servicing while it is running.

Additionally, the generously sized, 180-pocket tool magazine (extendable to 330) is helpful, as a large number of cutters are needed to cope with Renold’s wide range of gearbox casing sizes and materials and a majority of these tools can be permanently resident in the magazine. 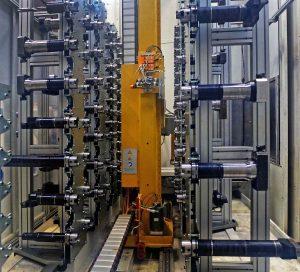 Drawing tolerances are tight for such large components, down to 20 microns total for some machined features like gear centres and shaft bores, some of which are produced by interpolation milling. The reliability and repeatability with which this level of accuracy is achieved on the MCX 1400 means that downstream benefits are experienced in the metrology department. CNC inspection is faster, as it requires less comprehensive routines and fewer components need to be checked.

Kingsbury prides itself on providing a production solution rather than a machine tool. While the BW installation at Rochdale was not what the supplier would class as a full turnkey project with tooling and fixtures, which Renold provided itself, it nevertheless entailed significant early support.

Initial test programs were converted directly into cycles for production parts covering two families of casing, while further programming support was provided along with on-site operator training. Service is carried out by Kingsbury’s own engineers via the company’s divisional LPM (Large Prismatic Machines) offices in Warwick.

The engineer concluded, “We have also been migrating the machining of our custom gearboxes and some standard product as well across to the BW machine to take advantage of its high productivity.

“It already does the work of the old HMC and another machining centre and we are looking to consolidate onto it jobs we currently put on a third machine. Once a process is in place on the MCX 1400, it eats the work.