Founded in 1994 by Mark Bevan, MJB Precision Engineering relocated a decade later to its current premises at Sturminster Newton. It allowed the 15-employee subcontractor to offer a modern manufacturing facility for prototyping and short batch work through to mass production of complex parts. 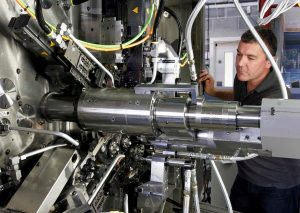 Winning a large automotive contract prompted Mr Bevan to analyse the best way of producing four different tool steel parts in batches of 3,000 per week each, which are assembled into a new product for luxury passenger cars. Process capability is 1.67 Cpk and quantities are set to rise steeply.

Mr Bevan began machining the components on three sliding-head lathes, 20 hours a day plus lights-out running, six days a week. However, five more sliders would have been needed to cope with predicted demand. There was insufficient space in the factory to house that number of extra machines, together with their full-length bar magazines, so relocation to larger premises would have been necessary. Furthermore, the extra staff needed to operate another five lathes would have raised overheads and consequently increased unit production costs, which are notoriously sensitive in the automotive industry.

The space and labour cost issues were resolved at a stroke in October 2011 by installing a 22 mm capacity INDEX CNC multi-spindle automatic from Kingsbury. It can turn-mill in a 24-second cycle a component that takes a sliding-head lathe 120 seconds to complete, representing a five-fold productivity increase. Capital investment in the multi was equivalent to buying five sliders; and being a single machine, the multi fits neatly into the available space in MJB’s factory.

The family of four automotive parts have been transferred to the MS22C, which has a scara backworking unit with synchronous pick-up spindle for presenting each parted-off component to dedicated backworking tools. A further benefit of using the MS22C derives from it being a fixed-head lathe, albeit with six C-axis spindles. It means that bar remnants are around five times shorter than the 300 mm of tool steel left after machining the last part on a sliding-head machine, which equates to around £10 in material saved on each bar.

“Apart from keeping down overheads, the Index multi has delivered other advantages. The machine is more rigidly built than our single-spindle lathes, so vibration is minimised, leading to better accuracy and surface finish and much longer tool life.”