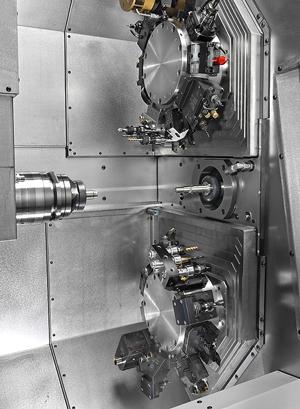 If a manufacturer plans to carry out rigorous turning of demanding materials including titanium and nickel alloys, care has to be taken to select rigid, powerful lathes. This is especially the case if the intended applications require sliding-head turn-milling, as these platforms tend to be less robust than fixed-head lathes. With this in mind, Scottish manufacturer to the global aerospace sector Martin Aerospace, Lanark, chose a German-built Traub TNL32-9P for its latest investment in sliding-head turning technology.

The machine started producing aerospace components from tough alloys 24/5 from the beginning of 2018. It has been so successful at fulfilling an ongoing contract for producing aero engine components from titanium, Inconel and stainless steel that the business had no hesitation in returning to the same source for a fixed-head lathe. Installed in July 2019, the Traub TNX65 produces parts from Inconel and Nimonic for the same customer.

Both lathes have reduced multiple operations to one-hit production, making it much easier to hold the required tolerances, which are generally to within ± 0.01 mm although one pin diameter has to be turned on the sliding-head lathe to ± 4 microns. At the same time, process cycles have been shortened dramatically, by over 90 per cent in one case on the TNL32-9P and by typically 70 per cent on the TNX65, added to which handling time and work-in-progress have been eliminated. Such significant savings are partly a result of the ability on both machines to have three tools in cut simultaneously, each having a different feed rate for optimum metal removal.

Neil Lawson, operations director at Martin Aerospace explained, “In 2017 a customer increased its annual requirement for five different parts, with quantities rising from a few hundred to 6,500 per part number. We were making them on a variety of twin-spindle turn-mill centres of sliding- and fixed-head design.

“Such a sharp increase meant investing in a new turning centre to meet the demand and a sliding-head lathe was appropriate in view of the shaft-type proportions. I went online to review what was available for machining our tough materials and Traub kept appearing in searches, often with reference to medical applications.”

Having identified Kingsbury as the UK agent, he visited the supplier’s Gosport technical centre where a TNL32 was available for trials. He was impressed not only with the robustness and capability of the machine but also the cutting strategies proposed by Kingsbury’s applications engineering department, especially the way the cycles at the main and counter spindles were balanced using the two turrets.

One two-operation cycle time of 6.5 minutes was reduced to a 1.2-minute single operation on the Traub, which is the shortest cycle. In another case, a 55-minute three-operation process was cut to one 15-minute cycle, which is now the longest.

The demonstration was so compelling that he ordered the machine on the same day and four weeks later it was being commissioned on the shop floor in Lanark. All five parts are produced from bar to a process capability of Cpk 1.67, underpinned by 100 per cent inspection, before they go for grinding and thread rolling. Mr Lawson confirmed that over the life of a tool cutting edge or insert, dimensions of features produced on the Traub sliding-head lathe do not vary by even a micron. 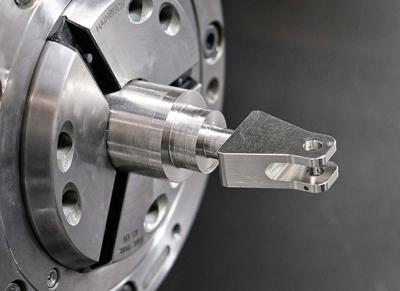 Another component produced by Martin Aerospace that is required in increasing quantities is a nozzle for a borescope. Machined from an Inconel billet 63.5 mm in diameter, 70 mm long and weighing 2.7 kg, it needed 147 minutes for the completion of seven operations on horizontal and vertical machining centres and lathes, during which the weight was reduced to 0.7 kg. The cycle time was cut to 65 minutes in a single operation on a twin-spindle turn-mill centre already on the shop floor in Lanark, on which it was possible to have two tools in cut simultaneously, deployed by the two tool carriers.

To cope with ever higher volumes and with an eye to raising productivity further to reduce the unit price for the customer, Mr Lawson again visited Kingsbury in Gosport, where the applications team managed to program the borescope part and demonstrate it coming off a Traub TNX65 fixed-head lathe in one hit in 25 minutes, representing a further cycle time reduction of more than 60 per cent.

It was achieved through a combination of employing higher speeds and feeds using the 10-tonne machine’s powerful spindles and live tooling, the ability of the triple-turret configuration to have three tools in cut at the same time, and the advanced cutting strategy developed by Kingsbury. The latter took advantage not only of balancing the cycles between the two identical spindles but also overlapping dis-similar operations using two tools at the same spindle, such as turning an outside diameter while drilling an axial hole.

A second component currently produced on the TNX65, this time from 32 mm bar fed from an LNS Quick Load 80 S2 magazine, is a Nimonic pin that is completed in one 15-minute cycle. Previously it required two operations on a turn-mill centre and a vertical machining centre, taking a total of 50 minutes. 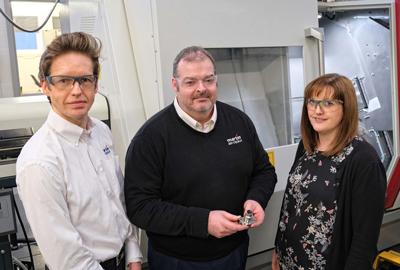 Summarising Martin Aerospace’s two Traub purchases, Mr Lawson said, “They are a godsend. Both are ideal for efficient production of parts in high volumes from tough materials and are platforms for continuous process improvements. This has allowed us to secure additional work, as we are able to provide significant savings to our customers.

“Kingsbury supplied the machines as turnkey packages, which our engineers have tweaked on the shop floor to gain extra productivity advantage.

“The supplier’s back-up has been excellent, including when we telephone with a query, as has the training provided for machine operation and programming using Traub’s offline CAM software.”