For the production of large prismatic elements that go into Index and Traub lathes, the German machine tool group has made a major investment in machining centres at its Deizisau factory. Kingsbury, the UK and Ireland agent, says that the automated, high precision machining centres have been purchased from Burkhardt+Weber (B+W), which coincidentally is also represented by Kingsbury.

Factory Manager Joachim Fink commented, “Prior to the recession, we were outsourcing a lot of work. Costs were high and there was a risk that delays in procurement could have caused problems in the Index and Traub assembly lines. To maintain build rate, it is essential to deliver machine beds to the assembly hall precisely on time.

“Furthermore, it was foreseeable that new developments such as our C100/C200 turning centre series and the new R200 turn-mill centres would require new machine beds that could not be machined by external manufacturers. So we had to expand our in-house capacity urgently.”

Gantry-type milling machines were on the shortlist, as their design promised a high degree of rigidity and capability. However, the size and type of workpieces to be machined – complex components up to four metres long and more than two meters high – prompted Index to favour horizontal machining.

High rigidity and stability for precision metal-cutting in the lower µm range is essential. Dieter Grözinger, Manager of Parts Processing in the Deizisau plant, recalled, “Our previous machine supplier could not offer us anything suitable and our research led us to BURKHARDT+WEBER, which specialises in large machines with pallet sizes up to 2,000 x 2,500 mm.

“We were convinced from the outset that we had found the right partner. Their rock-solid machine tool construction impressed us; everything was compatible, from the bed to the column, from the milling spindle to the tool changer.”

Index opted for the B+W MCX 1400 machining centre with a 1,600 x 2,500 mm pallet capable of supporting up to 11 tonnes. The specification required by Index was exacting, even by B+W standards. One of the major criteria was accuracy, especially with respect to angularity and parallelism over long slideways. Less than 10 µm deviation over 1 metre (in some cases 2 metres) was specified.

High tooling standards were also demanded. For the large spindle heads, a quadruple clamping arrangement was selected to support the tools, each of which can weigh up to 75 kg.

B+W attaches great importance to the thermal stability of its machines, which are designed to be thermo-symmetrical and thermo-stable. The X and Z axis ways and also part of the column are cast in polymer concrete to add mass and increase thermal inertia. The 52 kW main spindle drive with a torque of 3,500 Nm is water cooled, as are the B-axis drive for the machine table and the X and Z axis drives.

The electrical cabinet is designed with an integral water cooling system so that the heat generated is not discharged into the factory. During the winter months, the extracted heat is routed to the staff facilities.

Dieter Grözinger pointed out that the machine environment plays a significant role, both with respect to shop floor conditions and the coolant and chip management systems.

He argued, “We require constant temperatures in the machine. It means that hot chips must be flushed out of the working area as quickly as possible before they can transfer their heat to the axes or to the component.

“This calls for high-pressure flushing for efficient chip disposal and clean coolant, without which optimum working conditions are impossible.”

Convinced by the quality of the first installation, Index decided to expand its investment. A further, slightly smaller B+W MCX 1200 with 1,250 x 1,600 mm pallets was purchased to replace a large, 18-year-old machining centre.

There were implications for the coolant and chip management equipment. Initially, separate systems were planned for each of the large machining centres. However, detailed planning revealed that a central plant would be more effective in terms of size, filtration, flow capacity and costs, especially as other machines in the prismatic machining area could be connected as well.

Index was also expecting a high degree of flexibility and availability from the new MCX machines. For Joachim Fink and his team, there was no question that the two machining centres had to be equipped with a flexible pallet system. He explained that the manufacturing philosophy in Deizisau is based on minimally attended night shifts and continuous production through breaks.

Index opted for a solution from the Finnish company Fastems. Some years ago, Index deployed a similar storage and retrieval system to automate three machining centres of a different make with a pallet size of 500 mm x 400 mm. The reliability and operability of the Fastems system is described by Index as very good and the fact that the supplier was able to provide a standard system for the 11-tonne pallets made it the automatic choice for the new order.

Then in 2011, at the EMO show in Hannover, Messrs Fink and Grözinger researched machines to replace ageing jig borers at Deizisau for finish machining headstocks, turret housings and slideways. Again, the aim was to separate part preparation and set-up from the machining cycles in a highly automated, flexible machining cell.

Mr Fink said, “We visited all relevant machine tool manufacturers and learned that there were no models available that met our demands”.

Dieter Grözinger added, “Either a conventional machine was recommended, which did not meet our productivity goals, or the manufacturers had neglected top precision machining in pursuit of other design concepts.”

Many potential suppliers quickly distanced themselves from the discussions when they recognised that the demands from Index would not allow a standard machine solution.

Dieter Grözinger continued, “Starting from the accuracy standard of a high precision jig borer, we set our machining tolerance at less than 5 μm over 1,600 mm of axis travel. For angular error over one metre, we asked for a positioning accuracy of less than 3 μm.

“We also wanted a self-supporting machine that could be installed on a concrete pad, without the need for a special foundation. In the end, few potential suppliers were left and of those, we chose Burkhardt+Weber again.”

The Index machine specification was so stringent that B+W requested a three-month planning phase to check internally the feasibility of the project. The main area under consideration was the thermal stability of the machine, which would later be designated MCX900μ. Each individual component to be produced on the machine was discussed in detail with Index to determine the best approach for avoiding thermal change.

To raise torsional and bending stiffness as well as thermal capacity, the machine ways for the X-axis and Z-Axis and the thermo-symmetrical column were filled with a mineral casting material, equipped with integrated water cooling circuits and controlled with temperature sensors, as on the previous B+W machines.

B+W engineers regard electronic accuracy compensation in the control as acceptable only for fine-tuning. The company maintains that true precision is only achievable mechanically.

The newly designed spindle of the MCX900μ is not gear driven, resulting in thermal and vibration advantages, and is powered by a precision balanced, hollow shaft spindle motor with internal cooling. It has 32kW of power and offers 100 Nm low-end torque at 100% duty cycle.

A Fastems MLS-HD FMS was part of the project and the supplier was also involved in the vibration damping exercise, as its multi-level store had to be mechanically isolated from the machine.

The plan is to install two MCX 900μ machines at Deizisau and three B+W MCX 900T mill-turn centres with torque motor tables to provide true vertical turning capability for 5-sided machining of components. The five machines will be linked by the second Fastems FMS, which is being extended to 60 metres in length. All additional machines are currently on order. 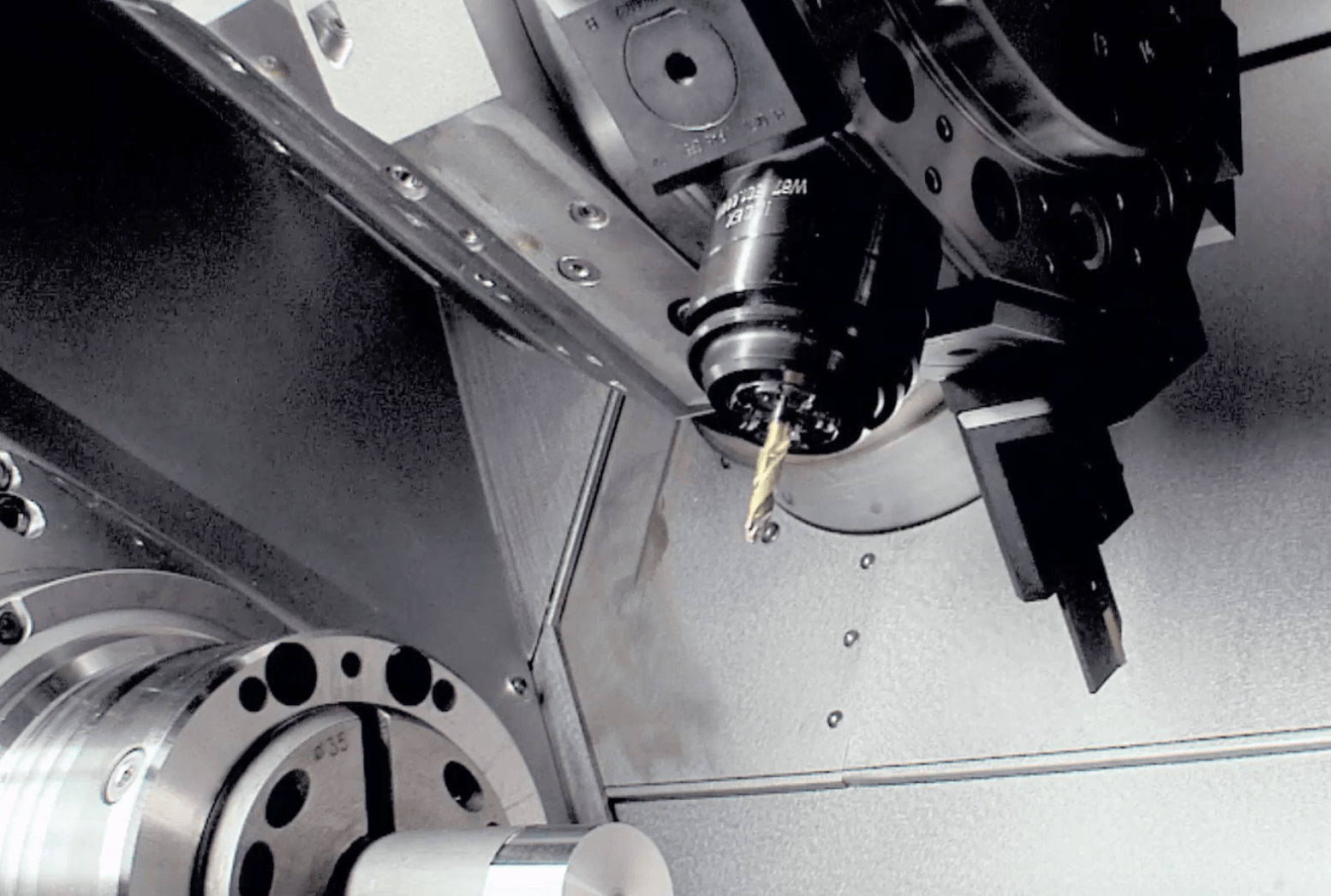