The second in a new series of machine tool videos has been released by Kingsbury. It shows that a component can be turned and milled 35 per cent faster in a German-built Index C200 twin-spindle lathe compared with using the next fastest machine of similar size and configuration from another manufacturer.

The remarkable aspect of the comparative study is that all of the time saving comes from idle time reductions. The same feeds, speeds and tooling were used on both lathes.

Rapid, highly repeatable tool change, featuring patented W-groove locators in the toolholders and matching grooves in each station of the lower and two upper turrets, enables rapid set-up and saves time before production even starts.

During the cycle, time savings come from high rapid traverse speeds and fast acceleration / deceleration in each axis, quicker synchronous pick-up and retraction of the opposed spindle, which saves 13 seconds, and rapid C-axis positioning for drilling eight cross holes, saving a further four seconds. The high indexing speed of each turret cuts an additional two seconds out of the cycle each time a new tool is deployed, 15 times in this case.

The icing on the cake is a 30 per cent reduction in tooling costs due to elimination of micro vibrations. It is a result of the innovative design of all Index C-Series lathes, whereby the distance between the tool tip and the patented kinematics behind the bed that actuate the turrets is half the distance of conventional compound slide systems on other lathes. The consequent increase in rigidity reduces vibration and raises the resonant frequency, providing more benign conditions for the cutters. 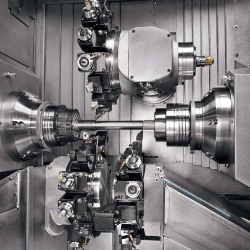 CNC turning cycle reduced by up to a third