A catastrophic failure of a 5-axis machining centre, coupled with a requirement to continue supplying 12 aircraft seat tray table assemblies per day that were being produced on it, is a nightmarish scenario for a subcontractor. It was exactly the problem Weymouth-based FGP Systems faced last autumn.

A solution was quickly found. It was to buy a new, German-built Hermle C 400 machining centre, which was supplied in September 2016 by sole UK agent Kingsbury in a lead-time of two weeks. After commissioning and training, the 5-axis, vertical-spindle machine was producing parts within three weeks from time of order. Three months later, the supplier moved it to a new, permanent location in the Weymouth facility over a period of just four days prior to Christmas.

Simon Griffiths-Hughes, Director of Engineering at FGP Systems said, “No other potential source of a quality 5-axis machining centre could react so quickly. 14 to 16 weeks is a normal lead-time from a factory if a machine is built to order, but Kingsbury had the Hermle C 400 in stock in its Gosport showroom.

“As luck would have it, the machine was perfectly specified for our requirements with spindle nose probing, laser tool setting, HSK 63 tools, an extended, 87-station magazine and an 18,000 rpm spindle to allow efficient machining of aluminium.

“Before we placed the order we spoke with several UK users of Hermle equipment, from bblue-chipfirms to small subcontractors, and all endorsed the brand. We were also mindful that we did not hear any negative comments.”

Nigel Pitman, Managing Director of FGP Systems added, “To change from the incumbent supplier of our nine 5-axis machining centres to Hermle was a huge decision for us.

“We had been talking to Kingsbury for about 18 months regarding purchasing a C 42 U 5-axis machine for another project, which did not go ahead.

“So we had already done a lot of research, which included a visit to the German factory. You can see the machines are built well, including the simple things. The trunnion bearings are much bigger than on most 5-axis machines, for example.

“Even something straightforward like the swarf conveyor impressed us. Some manufacturers provide a swan neck that is too high and narrow for efficient removal of chips, whereas Hermle’s conveyor is low-rise and as wide as the machining area.”

He went on to say that the machine has not missed a beat since it was installed, despite running double shifts, seven days a week. It has been more or less devoted to producing a family of components from aluminium billets for the aircraft seat tray tables. The first operation on the main part involves 3-axis milling with two axes clamped while the second requires a fully interpolative 5-axis cycle.

The C 400 has excelled especially in respect of the high surface finish being achieved on machined components. It was previously causing FGP Systems some difficulty, as the grey anodising stipulated by the customer tended to show up every machining mark left by scanning with a ball nose milling cutter. Many hours of manual polishing were needed to remove the marks. Now components go straight from the Hermle to anodising without any further work, such is the consistency of surface finish.

The C 400 is a model from a new, lower-priced machine series from Hermle that sits alongside the manufacturer’s core range. The machine has the same modified gantry design and mineral cast bed, offering rigidity, low vibration and high accuracy. Quality is therefore equivalent; the only proviso is that fewer options are available, a limitation that does not affect the range of applications at FGP Systems.

The standard CNC system is Heidenhain’s latest milling control, the TNC 640. Mr Griffiths-Hughes says it is popular with the subcontractor’s machine operators due to its ease of use, large colour monitor and built-in Hermle macros that provide support for complex milling. Programs can be transferred seamlessly from the other 5-axis machines on the shop floor, as they all use earlier TNC control systems.

There is no turning capability on the rotary table of the C 400, but the TNC 640 has the option of software for interpolation turning. It exploits circular movement using the X and Y axes, synchronised rotation of a turning tool in the spindle and simultaneous feed in Z to single-point profile-turn circular features on the inside or outside of a static component on the table. With a lot of big flanges requiring recesses going through the machine shop at Weymouth, the extra software is likely to be an early addition when the tray table contract is migrated to an automated production cell at the factory and the C 400 is deployed onto other work.

In conclusion, Mr Pitman said, “You need reliable machines in subcontracting, especially when serving the aerospace market, not thoroughbreds that are highly productive one minute and then break down the next. It is early days, but it appears that the Hermle is going to give us the uptime we need, as well as the quality.

“The other essential thing a subcontractor needs is good service. Kingsbury has impressed us so far, in particular with how quickly two of its engineers moved the C 400 in four days to allow us to install other new equipment urgently. It would normally take twice as long to relocate a 5-axis machining centre.”

In text above: The 850 x 700 x 500 mm working volume of the Hermle C 400, showing the rotary table and trunnion arrangement that provides the 4th and 5th CNC axes. Stainless steel cladding is used throughout. 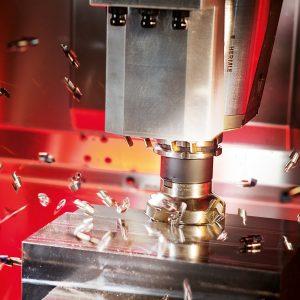