Founded in 2003 jointly by John Biddlecombe and Simon Kingdon-Butcher, Global Technologies Racing (GTR) is the undisputed leading manufacturer of laminated carbon fibre components for the motorsport sector in the UK, supplying most of the Formula 1 teams.

Metallic materials are also machined and the components produced are to be found in all parts of a race car – chassis, transmission and engine. GTR caters for everything from concept and design through patterns and moulds to complete assemblies.

Prior to starting the subcontract machining firm, the two directors owned G Force, which designed and built racing cars for various motorsport series including IndyCar, Formula Nippon and Le Mans Prototype sports cars. Another notable success was the construction of Thrust SSC, which holds the current land speed record of 763 mph set on 15th October 1997. 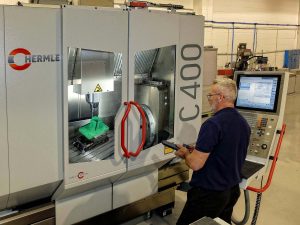 Over the last decade and a half, GTR has become so successful that the constantly rising demand on its machine shop in Easthampnett, West Sussex, meant that it needed to expand into a second facility in nearby Bognor Regis at the beginning of 2018. Shortly after moving in, a pair of Hermle C 400 machining centres was ordered from UK agent Kingsbury to boost the contract machinist’s capability for 5-axis processing.

The first, with a coolant tank for ‘wet’ machining and an additional 50-pocket tool magazine to supplement the standard 38 cutters, was delivered in mid-2018. It was followed in February 2019 by a second model equipped with dust extraction for ‘dry’ machining of composite materials without coolant. Both machines have a trunnion-mounted table that provides the fourth and fifth CNC axes.

Mr Kingdon-Butcher explained, “Wherever possible we avoid wet cutting carbon fibre, but some of the components produced at our Fontwell factory have aluminium or titanium inserts within their structure, depending on the customer’s specifications.

“In those cases we have to cut in the presence of coolant to avoid the heat that would be generated if we were to machine metals without coolant. This ensures that the structural properties of the adjacent areas of composite are not affected.” 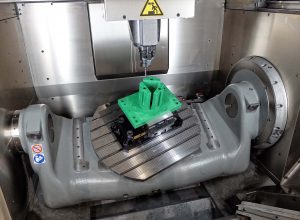 Although 95 per cent of the ISO 9001:2008 and AS 9100 approved subcontractor’s turnover is derived from motorsport projects, there is a growing need to machine metallic parts for road-going supercars as well as for other industrial sectors such as defence, aerospace, medical and offshore. The Hermle machining centre with coolant is ideal for fulfilling those contracts and the often complex parts benefit from the machine’s fully-interpolative 5-axis contouring capability. Alternatively, the ability to reposition and clamp one or two rotary axes in-cycle for less complex 4- and 3-axis cycles leads to reduced fixturing costs, fewer component set-ups and better accuracy.

The ‘dry’ machining centre, which is preferred for producing a majority of the carbon fibre parts, is linked to a Hermle-built external extraction unit by a large diameter, flexible hose that is normally connected to a port on the side of the guarding so that composite dust generated during machining is continuously sucked away from the working area. However, to remove residual dust that can collect inside the machine, the operator can remove the hose nozzle from its mount and use it as a portable vacuum to clean the machine base, trunnion table and other surfaces.

Tolerances down to ± 0.01 mm have to be held and while this is commonplace when machining metals, on carbon fibre parts it is challenging. GTR’s success in this area is down to its long experience working with composites coupled with the rigidity of the Hermles, which avoids generation of harmonics when trimming thin carbon fibre sections. Thin-wall structures are needed to minimise weight in race cars, supercars and aircraft, but edges must be nearly perfect to avoid stress fractures, so vibration when using the mainly PCD (polycrystalline diamond) cutters cannot be tolerated.

When GTR moved into its new Bognor Regis premises, in so doing it took over another subcontractor supplying the motorsport sector and inherited a number of machine tools, one of which was a nine-year-old Hermle B 300 5-axis machining centre.

Mr Kingdon-Butcher continued, “The performance and reliability of this machine played a part in our decision to purchase two new models of the same make, despite having used 5-axis machining centres from other suppliers for many years. Hermle machines have a good reputation in the market and our machine shop manager, Martin Sammut, was familiar with the brand.

“We cultivate strong and lasting trading relationships with our customers, maintaining close communication, competitive pricing, rapid response and timely deliveries, and we look for similar associations with our machine suppliers. Kingsbury’s approachability and reputation for providing good training, technical support and after-sales service clinched our decision to purchase from them.”