Alcon Components, Tamworth, is one of the world’s foremost companies in the design and manufacture of high performance brake and clutch systems. A second automated production cell has been installed at the Tamworth factory of Alcon Components to cope with worldwide demand for its monobloc brake calipers. They are machined from aluminium or lithium billet for motorsport race cars and high-performance road cars, as well as from cast iron for military vehicles.

Similar to the original automated system installed in February 2007, the latest configuration is based on a bigger Hermle 5-axis vertical machining centre, a model C 32 U with 650 x 650 x 500 mm axis travels, reflecting the fact that brake calipers have become larger during the past decade. Supplied by Kingsbury, UK agent for the German machine manufacturer, the C 32 U has been equipped with an Erowa Robot Easy that stores twelve 210 mm diameter pallets, which are transferred to and from the working area by a horizontally-travelling load / unload arm.

When the first cell went in, it allowed brake calipers to be produced in two operations totalling about eight hours. Total cycle times were halved compared with the former process of producing them in four, five or six operations on 4-axis, horizontal-spindle, twin-pallet machining centres. Handling times, floor-to-floor times and work-in-progress were also drastically reduced.

Alcon’s production engineering manager Brian Cutler commented, “The first automated system from Kingsbury for machining calipers proved so successful that we had no hesitation in following a similar route this time. All of the production benefits apply to the second cell as well. 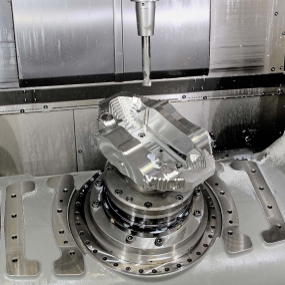 “The Erowa pallet pool is positioned a little differently, in front of the machine rather than to the side, but it is set back far enough for the operator to have unrestricted access to the working area.

“This is important, as much of the day shift is spent setting and proving-out new prototypes, with the remainder of the 24 hours devoted to running production batches.”

Designs are produced in SolidWorks and Open Mind’s hyperMILL CAM software is mainly used for creating the cutter paths prior to program transfer to the Heidenhain control fitted to the Hermle C 32 U.

Brake caliper production is a natural application for 5-axis machining, as Alcon discovered 10 years ago. Compared with 4-axis metalcutting, it is not only faster but also inherently more accurate, as approach angles can be adjusted to allow shorter and hence more rigid toolholders to access awkward areas of a component. Tolerances down to 13 microns are held easily, according to Mr Cutler.

Additionally, 5-axis capability gives Alcon’s designers more flexibility when developing products, as they can include complex surfaces and holes at compound angles, without increasing the number of set-ups or unduly lengthening cutting cycles. Consequently, in respect of the modern design of its products, the company has had a lot of positive feedback from the market.

Images:
Brian Cutler at the control of the latest Hermle-Erowa production cell to be delivered by Kingsbury to Alcon Components.
In text above: A monobloc brake caliper being machined from solid aluminium on the Hermle
C 32 U 5-axis machining centre.