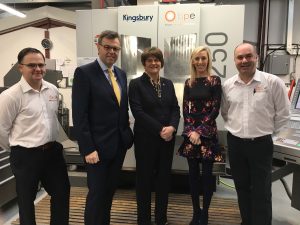 The contract machinists started operations in 2006 and in little more than a decade have made significant strides, the company now employing 34 staff. Earlier this year, Democratic Unionist Party MLA (Member of the Legislative Assembly) for the local Upper Bann constituency, Carla Lockhart, hosted a visit to the firm by party leader Arlene Foster and the Chief Executive of Invest Northern Ireland, Alistair Hamilton.

In recent years, there has been an increase in the complexity of the prismatic aerospace parts that Boyce Precision manufactures, making a progression from 3-axis to 5-axis machining necessary. For the new machining capacity, joint owners and brothers George and Brian Boyce decided to move away from the supplier of two-thirds of their 3-axis machines. Instead they opted for a 600 x 550 x 450 mm capacity, German-built Hermle C 250, which was supplied in July 2017 by sole UK and Ireland agent, Kingsbury.

The 5-axis machine’s suitability was immediately apparent and a second, identical model was installed three months later. The configuration of Hermle vertical machining centres places the three linear axes within a modified gantry above the working area, whilst the integrated trunnion provides a rigid, stable platform for the two rotary axes, which includes a ± 115 degree swivel for considerable production flexibility. The machines in Craigavon have integral Blum tool breakage detection to allow long periods of unattended running across the two shifts that Boyce Precision operates.

A further trend within the aircraft seating sector is towards larger components, which are even more complex, to avoid the labour costs and delays associated with assembly. Once orders for such parts were promised, Mr Boyce had no hesitation in placing an order for a larger Hermle C 400 with a working volume of 850 x 700 x 500 mm.

It will be delivered in November 2018 directly to a new, 18,000 sq ft factory unit currently being built for the subcontractor in Portadown. Treble the size of the current premises, the building represents a £3 million investment, taking into account the capital cost of the third Hermle 5-axis machine and the imminent purchase of two further 3-axis machining centres.

George Boyce commented, “As these are our first 5-axis machines, ordering the initial one was a big decision for us. Our company policy is to buy the very best equipment we can afford, not only machines but also workholding, tooling and engineering software. 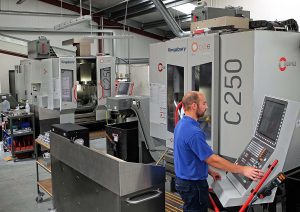 “We had extensively researched the 5-axis vertical machining centre options, but before going ahead with Hermle I had a chance to see how the machines are manufactured at an open house at their factory in Gosheim, which gave me confidence in the build quality.

“Price and after sales support were also important considerations and on both counts we felt confident in the Kingsbury offering. Their training of our skilled engineers on the shop floor was seamless, allowing them to pick up 5-axis operation quickly.”

The benefits of 5-axis machining to Boyce Precision are far-reaching. One-third of the time, the two Hermle C 250s are executing programs requiring interpolation of all five CNC axes simultaneously – work which formerly could not have been carried out.

To fulfil other contracts requiring only 3-axis cycles, automatic positioning and clamping of the rotary axes reduces the number of separate operations needed to complete a job, in some cases dramatically. Aerospace parts that used to require two or three separate operations are now completed in one hit. 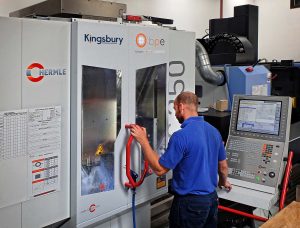 One pharmaceutical component that used to require eight separate set-ups now requires only two. This sector together with medical contracts accounts for 20 per cent of the subcontractor’s turnover, with the remaining 10 per cent spread across the automotive industry, motorsport, TT racing and general engineering. The latter work focuses on contracts for the construction industry, particularly bespoke jigs and fixtures, but also includes the manufacture of items for film sets, such as aluminium-bladed swords, daggers, shield parts and catapults used by actors in the television series, Game of Thrones.

The reduction in the number of set-ups also means that tight tolerances can be held more easily. On some aerospace parts and even those for the pharmaceutical industry, such as blister pack tooling, accuracy specified on the drawings is down to ± 20 microns.

Mr Boyce continued, “Hermle machines are inherently very accurate and able to hold this tolerance easily. The spindle in particular has no discernible run-out. Machine construction is very rigid, which not only ensures accuracy but also leads to longer tool life. The cachet of having Hermle equipment on your capacity list is not to be underestimated.” 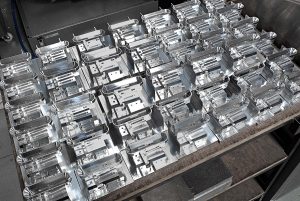 He recounted an incident in January 2018 when the 18,000 rpm, HSK 63 spindle of the second Hermle C 250 was accidentally knocked out of alignment by an operator. Luckily, the machine has a patented safety feature in the spindle whereby six mounting bolts with collapsible sleeves crumple and absorb the energy just long enough for the shock to be detected, triggering automatic machine stoppage.

The spindle itself was undamaged and needed only to be remounted with six new bolts, which was done by one of Kingsbury’s local service engineers within a few hours the next working day. It saved the expense of buying a new spindle cartridge and perhaps also the motor, as well as the costs of more major maintenance and extended machine downtime.

To ensure that there was no underlying spindle damage, vibration analysis files captured at different rotational speeds were sent by Kingsbury engineers to the Hermle factory for evaluation, where it was confirmed that the accident had not caused a spindle fault.