Part of the British Engines Group based in the north of England, BEL Engineering operates two factories in Newcastle-upon-Tyne and Cramlington to provide project managed manufacturing solutions, some of which involve heavy duty subcontract machining of large workpieces weighing up to 40 tonnes.

Much of the metalcutting activity involves turning on horizontal and vertical-spindle lathes, but parts often have to be transferred to a prismatic machining platform for milled and drilled features to be added. Around thirty 3-axis CNC mills are available for this purpose. To enable such parts to be produced more economically in one clamping, the subcontractor recently invested in a German-built Hermle C 62 UMT 5-axis, vertical-spindle machining centre supplied by sole UK, Ireland and Middle East agent, Kingsbury. 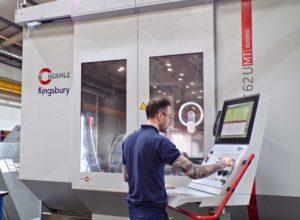 Having a nominal one metre cube working envelope, the machine was installed in the Newcastle-upon-Tyne factory in October 2019. It was BEL Engineering’s second venture into this technology, an Italian-built, 5-axis mill-turn centre with travels in excess of two metres in X, Y and Z having been installed a few years earlier. There is also on site a pair of Japanese-built 5-axis CNC milling centres of nominal one-third metre cube capacity, one with a 10-pallet storage system.

The Hermle fits neatly between these larger and smaller 5-axis centres, extending the subcontractor’s capacity. In particular, following the company’s accreditation in October 2019 to the aerospace quality management system AS9100, the machine is proving to be of ideal size to produce aero engine parts for a nearby customer. Diversification from supplying predominantly the oil and gas industry to include serving the aerospace, defence and civil nuclear sectors is a key pillar of BEL Engineering’s growth strategy.

It is already bearing fruit, as the manufacture of fan shafts, discs and other rotational parts for aero engines, input and output shafts and bearing housings for gearboxes, and components for engine test rigs has increased the revenue from aerospace contracts from 10 per cent of the subcontractor’s business to about a quarter.

“A pair of similar Hermle mill-turn centres is being used successfully at another of our group companies, Michell Bearings, so this influenced our choice of the German machine.

“Another facet of the decision was that Kingsbury is quoting us for production solutions based on machining centres from other principals in its portfolio and we like the turnkey approach that it brings to these projects.

“In a recent exercise, its engineers supported us on-site here by helping us to adjust in-process probing cycles so that we can run the same programs in the Siemens 840D control of the Hermle as those in use at one of our aerospace customers operating the identical type of machine.”

The C 62 UMT is the largest model in the German manufacturer’s range. Since it was installed in Newcastle-upon-Tyne, it has operated around the clock five days a week tackling about a dozen different jobs, only two of which require no turning. When producing input and output shafts, for example, which involves only 20 per cent prismatic metalcutting, the machine has proved more than capable of holding 14 microns total tolerance on turned features and 30 microns positional tolerance on hole centres. 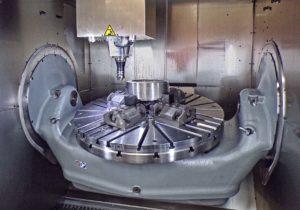 The 400 rpm torque table can turn components using the C-axis even when the ±130-degree, dual-drive, A-axis trunnion is swung away from the horizontal. It allows shorter, more rigid cutters to approach closer to the workpiece surface to achieve higher metal removal rates, better surface finish and longer tool life. Additionally, tilted turning enables, for instance, the top of a seat ring for an offshore stop valve that is inclined at an angle of 10 degrees to be machined without the need for a special fixture, reducing manufacturing cost and lead-time.

During non-turning sections of production cycles, the rotary axes have been used mainly to position components for 3-axis milling and drilling, with only a small amount of full 5-axis interpolation so far. Mr Westgarth pointed out, however, that they are in a good position now to bid for more such work.