The Traub TNL32-11 is a new addition to the German manufacturer’s automatic lathe series, which is capable of sliding-head and fixed-head turning and milling. Availability in the UK and Ireland is through sole agent, Kingsbury, Gosport.

The key feature of the machine is a 2-axis reverse end-working attachment mounted below the main spindle that increases the number of CNC axes to 11, allowing simultaneous machining with three fully independent tools. Significant savings in cycle times are possible, especially when producing components with a high proportion of drilling.

Like the TNL32-9, the TNL32-11 is a 32 mm bar lathe with a headstock moving in the Z-axis, an upper and identical lower turret with X, Y, and Z axes, an additional 100-degree B-axis on the upper turret and a counter spindle that travels in X and Z.

The reverse end-working attachment sits on an additional cross slide moving in the X and Z axes and makes eight additional tool stations available, four of which are for fixed tools while the remainder are live. There is also a station for a workpiece gripper that can unload a machined workpiece from the counter spindle, so while a finished workpiece is being discharged the next part can be undergoing machining with two tools at the main spindle.

With a 3.4 kW drive and a maximum speed of 12,000 rpm, the live tools in the reverse end-working attachment are both powerful and productive. The toolholders are robust and stiff with a shank diameter of 36 mm. Individually controllable coolant pressure up to 80 bar is available at every station. One live position can be used as a deep hole drilling station with a coolant supply up to 120 bar. The attachment can also be used as a tailstock for machining long components.

Alongside these advantages, the Traub TNL32-11 sliding/fixed headstock lathe (conversion takes less than 15 minutes) offers many other benefits. The turret technology is particularly impressive. Indexing is performed using an NC rotary axis that controls movement via an internal planetary gear. It allows the turret to be indexed to any position without the need for a mechanical locking mechanism. Free positioning of the turret makes multiple tool assignment possible at each station.

A further highlight is the patented, twin drive train arrangement in each turret, which decreases non-machining times and lowers machining cost per part. While one tool is in cut, the tool intended for the next operation can be accelerated to the desired speed and is immediately available at full rpm after the turret has indexed. Jerky accelerations and delays that were previously unavoidable are eliminated. In addition, the user benefits from reduced toolholder wear owing to the lower acceleration rates. Even with live tools, chip-to-chip times are down to 0.3 second. 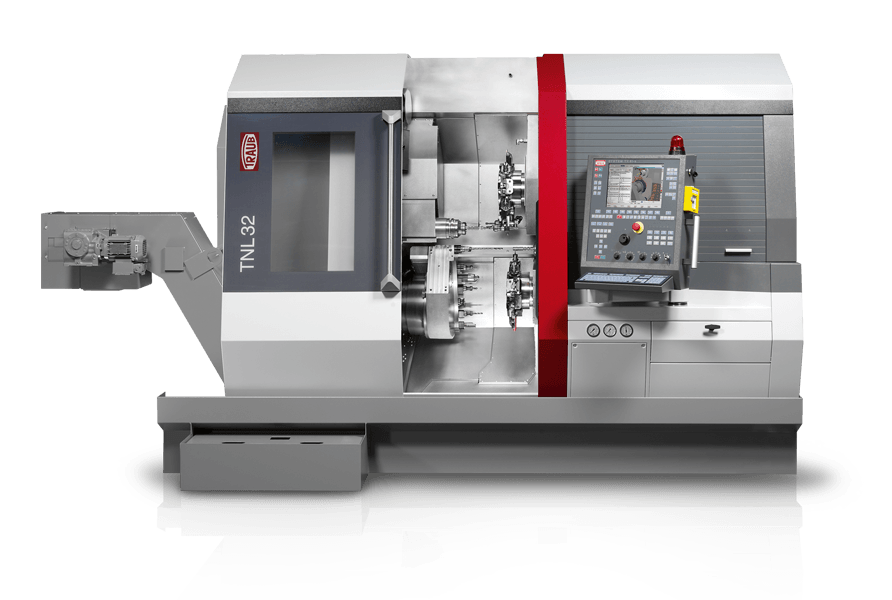 The Traub TNL32-11 is a new addition to the German manufacturer’s auto...

The Traub TNL32-11 is a new addition to the German manufacturer’s auto...