The second generation of the successful Index G200 turn-mill centre, designed for highly productive, complete machining of components from bar or billet, has been introduced by the German manufacturer, Index. Available in the UK, Ireland and the Middle East through sole agent Kingsbury, the machine has extensive improvements including increased turning length, up from 400 to 660 mm, a second lower tool carrier and a higher power milling spindle.

The compact machine offers significantly improved performance in a footprint virtually the same as its predecessor’s, delivering cycle time reductions of up to 30 per cent. New also is the vertical orientation of the heavily ribbed, low-vibration, cast bed. It optimises chip flow and provides more space in the working area, especially for the lower tool turrets. Arranged in mirror image, each has an independent, ± 45 mm Y-axis as well as 14 live tool stations rated at 16 kW / 16 Nm (25% DC) and 7,200 rpm maximum speed.

For maximum productivity, it is possible to utilise all three turrets simultaneously at either the main spindle or counter spindle, without interference. For example, a drill in a lower turret can machine a bore in a workpiece at one spindle while the other lower turret and the upper tool carrier balance-turn the outside diameter.

The B-axis can swing the upper tool carrier so that its turret is in a horizontal orientation and move it into the work area up to 30 mm below the spindle centreline. Diametrically opposite tools can then mill, drill or turn workpieces in both spindles, simultaneously if required. The feature enables machining of front-end and reverse-end faces of components with straight tools, which is more accurate and less costly than using right-angle tool holders.

Additionally, the 845 mm travel of the upper tool carrier is sufficient for the entire maximum turning length to be traversed without having to rotate the B-axis, which is often not the case with other machine concepts.

Based on the Siemens S840D sl, the Xpanel I4.0-ready operating concept with real-time program simulation developed by Index simplifies use of the CNC system. For example, many elements of the control panel have been integrated into the display and can be used directly via the 18.5” touch-screen.

Another useful feature on the control panel is that active buttons and switches are backlit by LEDs, while currently inactive ones remain unlit. An optional PC in the control cabinet allows NX CAM to run directly on the machine, which is particularly useful for applications requiring extensive milling.

A video of the new G200 in action may be seen here: 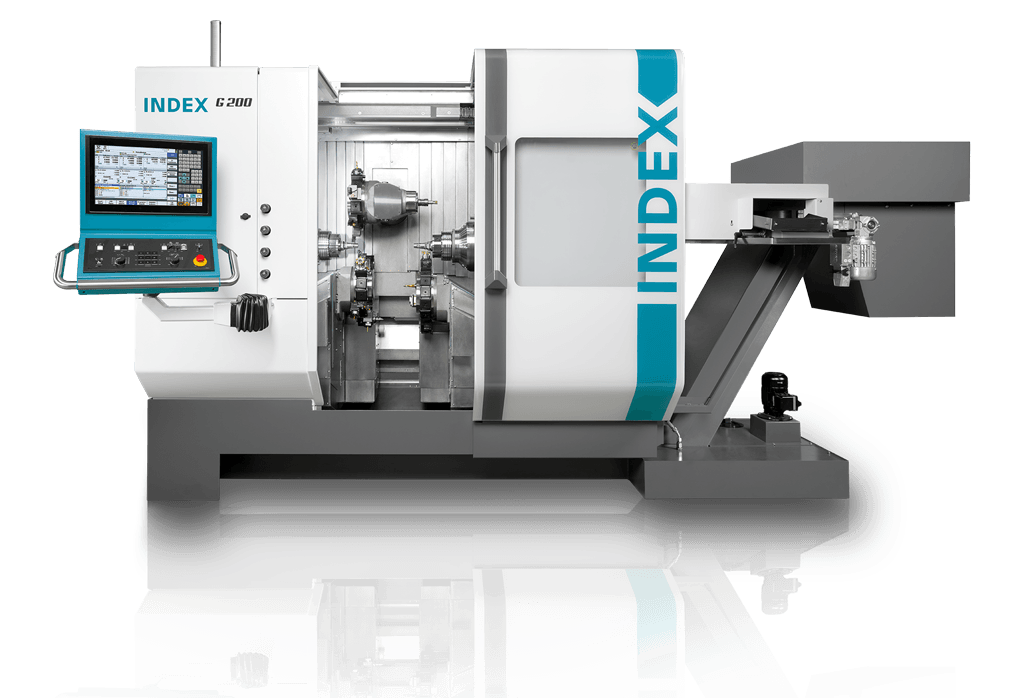